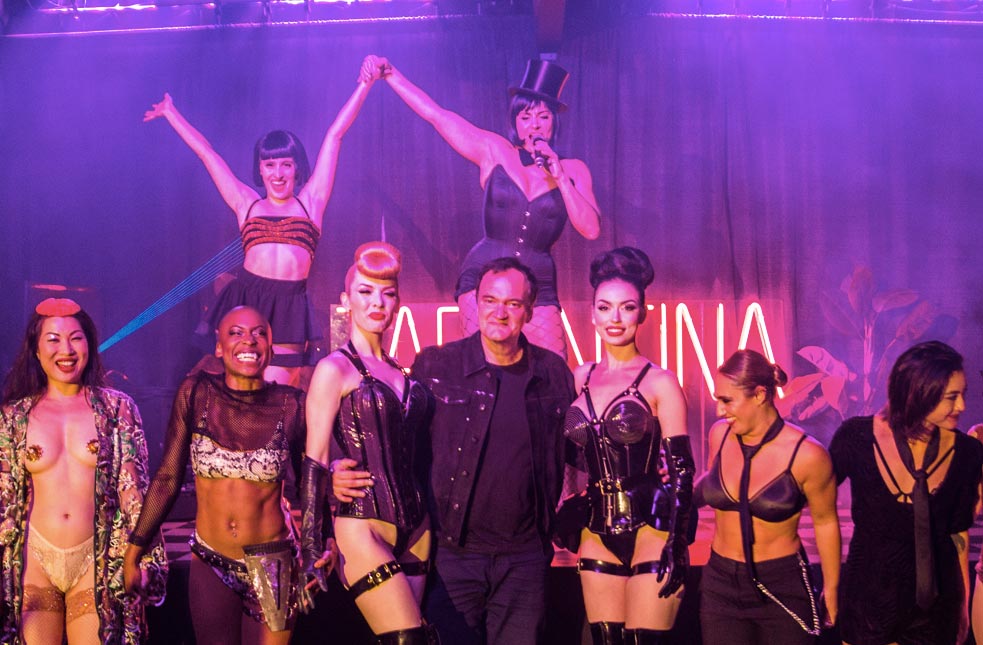 Tosca Rivola is thrilled to present the One Year Anniversary edition of TARANTINA, taking stage January 30th, 2020 at Club Bahia in Echo Park, Los Angeles. For over a year, the monthly cabaret showcase has transformed the club into a celebration of all things Quentin Tarantino.

In each event, world-class acrobats, lounge singers, burlesque performers and more pay honor to the iconic femme-fatales that have enthralled, terrified and seduced us in films like Pulp Fiction, Reservoir Dogs, Kill Bill and beyond.

Attendees enjoy special Tarantino-themed cocktails and an authentic 80s dive bar atmosphere with the two-act show before dancing the night away to Tarantino soundtrack classics after the final performance.

The August 15th edition of the show came several weeks after the world premiere of Tarantino’s ninth film, Once Upon A Time In Hollywood, and incorporated a new act inspired by the movie. And Quentin Tarantino, himself, showed up to see it, with Eli Roth and a number of other VIP guests in tow. They gave several standing ovations, and Tarantino even took a bow with the performers at the end of the show. 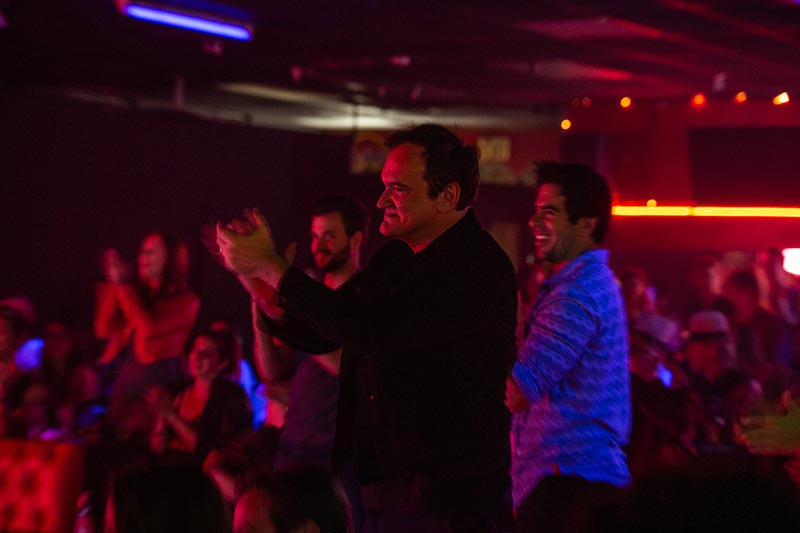 “Having Quentin come see Tarantina last night was incredibly cathartic in so many ways,” says Rivola. “Watching him watch our creations based on his creation in real time, and genuinely enjoying what he was seeing is a huge affirmation to my many years of work, training and research. I couldn’t have done it without my incredible team and the baddest ladies of LA! Thank you Quentin for making our dreams come true last night!”

Rivola first conceived of TARANTINA near the end of 2018, realizing that many of her most cherished female characters in cinema were from Quentin Tarantino movies. As she started to conceptualize the production, she realized that many women in her close-knit performance community were a total shoe-in for the characters she was searching for. Casting couldn’t have been easier!

Tarantino has always displayed a unique focus on creating interesting female characters,” says Rivola. “He’s created some of the most iconic heroines and femme fatales in cinema history, never going into the cliches of the damsel in distress. I’ve always admired the outlaw woman in her many forms”. 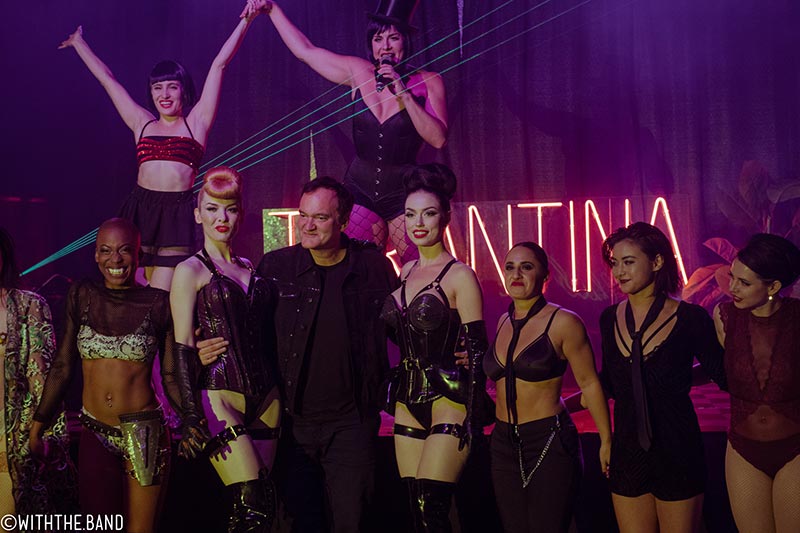 The show features stand out performers like Brynn Route, an acrobatic pole sensation who brings to life young Nancy Callahan from the iconic dingy stripclub scene in Sin City. Kyla Carter, an LA native contortionist and general style queen embodies the raw, unapologetic energy of Jackie Brown in her grapple over a firearm with Ordell Robbie. Donna Hood, one of LA’s top burlesque entertainers and show producer herself, is stabbed awake by a perfectly swarovski’d syringe and performs a strip-en-pointe number as Mia Wallace from everyone’s favorite Pulp Fiction. The show lets audience members be knee-deep in cinema’s most memorable moments by giving them the opportunity to purchase “Experiences” that allow them to participate in ways they would have never dreamed. 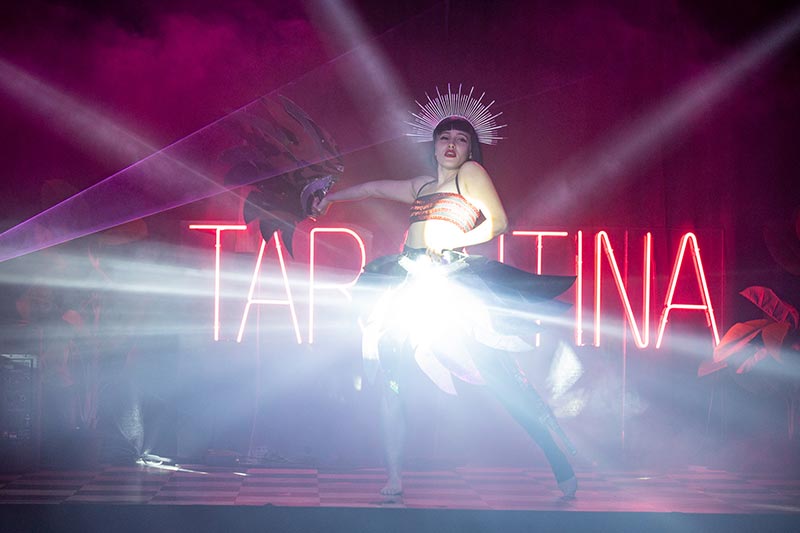 Tosca Rivola is a professional performance artist specializing in Roue Cyr and Burlesque. She is a zero-generation immigrant to the US from Prague and recently founded Fatale Factory – a production company that curates stage shows like TARANTINA with a foot in corporate entertainment producing for clients like Google, McLaren and Nike. With a multicultural background, an insatiable appetite for aesthetic, and a refined technical skill set, she has produced a number of incredibly compelling performance for art-savvy audiences and corporate clients alike. She competed in the Wheel Gymnastics World Championships twice, was published in Rolling Stone Magazine and was crowned Miss Viva Las Vegas 2015. 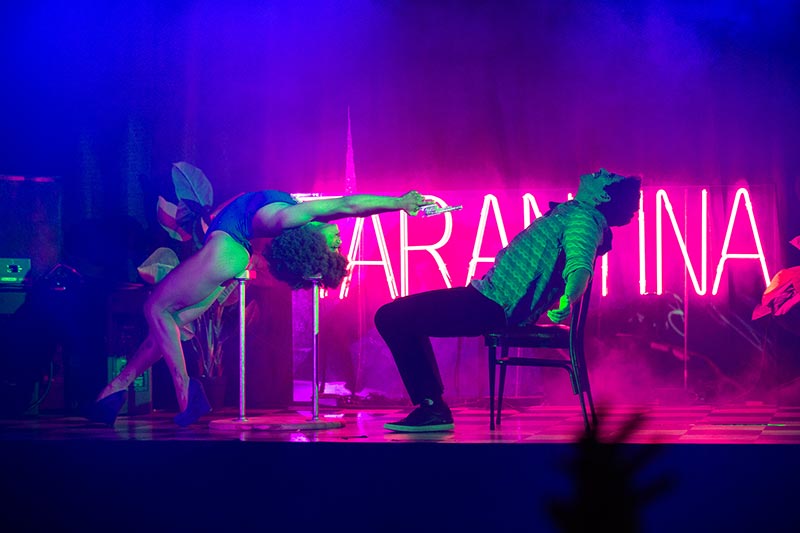 We bring the femme fatales from Tarantino flicks to life! This show celebrates the very best of Tarantino girlpower – his heroines have slashed, kicked,  punched and seduced their way into our hearts and we are here to pay homage to them. Eat your hearts out all ya burlesque bootlickers, b film buffs and movement maniacs!.